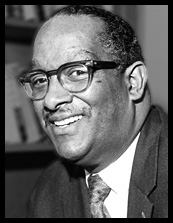 Credited as serving as one of the first African American leaders at Indiana University, few individuals have made a more powerful impact on the academic environment of Indiana University than Herman Hudson, founder of IU’s Department of Afro-American Studies. Born in 1923 in Birmingham, Alabama, Hudson came from a family where education was strongly valued. Hudson received his bachelor’s, master's, and doctoral degrees from the University of Michigan and later arrived at IU in 1968 after teaching at Florida A&M University, the University of Puerto Rico, and Kabul University in Afghanistan.

Hudson’s success was not easily achieved. He suffered from meningitis and was legally blind for most of his life. Despite adversity, Hudson played a significant role in starting programs at Indiana University that showcased African and African American performing arts. Hudson established the Soul Revue, the Choral Ensemble, and the African American Dance Company -- all part of IU’s African American Arts Institute (AAAI). Hudson also helped form race relations within the community by founding the National Council of Black Studies (NCBS). Hudson sadly passed away in 1999 after a long and distinguished career at Indiana University.